Introduction and background to the campaign can be read here: http://micromegasatwar.blogspot.ca/2017/07/the-invasion-of-scipio-chapter-1-intro.html
This game was played using Dropfleet Commander with each side commanding 999 points.
Standard scenario scoring was used with the space station being a critical location for the Xenos only.

The invasion of Scipio has begun, with the spearhead of the attack focusing on the resource rich Delta Valley. The planetary reserve forces combined with the Imperial Rapid Response force were able to muster a defensive battlegroup to meet the invasionary forces.

The Delta valley has several strategically important cities, the most important is the city of Theseus which is central to the valley and contains the military, communications and orbital defences infrastructure. The other cities surrounding the valley contain key commercial and industrial assets.

The defenders focused their forces centrally in the valley enabling them to react to any attack trajectory from a central strong point.  Meanwhile the invading force advance on each of the flanks, avoiding the orbital defences in favour of the softer civilian targets.

﻿
The xenos advance aggressively towards the civilian soft targets and trying to go around the Imperial flanks with their speed. They seem, however, to have underestimated the firepower that the Imperium has at it's disposal. The heavy cruiser Shenlong blows up to concentrated fire from the burnthrough laser of the cruiser Berlin and the supported by battlecruiser Atlantis. The terrible explosion also damages the Xeno battlecruiser Basilisk  which is left to spearhead the assault on the right flank.
Behind the spearhead advances the Xeno dropships and landers capturing the key assets at Gisco and Gnaeus.

On the opposite flank, the defenders manage to secure Flavius with troops just in time as the invaders continue their advance up the flank. Once again firing at close combat turns decisive as the advancing attackers take long range fire from the cruisers the defenders but inflict terrible damage with their close action weapons and bombers launched from the cruiser Hydra.


This flank turns into a stalemate as both sides shoot down each other's frigates and cruisers in mutual destruction. In the end the invaders manage to land some troops Flavius but they are quickly overwhelmed as the Imperials had managed to secure the objective in advance.

Meanwhile in the middle of the board and on the invader right, the Basilisk manages to shoot down the Imperial cruiser Berlin and the Toulon frigates supporting it. However, the big guns of the Atlantis and the bombers launched by the Seattle finish the Basilisk off before it can do more damage.

The destruction of the Basilisk leaves the remaining frigates and Chimera troopships of the attackers vulnerable. Knowing that their doom is pending these ships rush to their objectives and drop more troops on the undefended cities of Barca and Gisco. They are then shot out of the sky by the Imperial defenders, who were one turn too late to prevent the suffering of the populations of these cities.

In the last turn the Imperial forces attempt to counter-drop troops on Barca, however the Xenos had anticipated this and dropped orbital defence guns which shot down the dropships as they were landing from atmosphere. The poor marines on those ships never had a chance before their ships were turned into burning wrecks.
﻿﻿
In the battle's conclusion, the attacking force was destroyed almost to the last ship, but not before the invaders were able to land troops and capture Gnaeus, Barca and Gisco. It was a pyrrhic victory for the Imperial Rapid Response Force; it proved able at doing it's job in space and in the air, however, large parts of the Delta Valley have fallen to the invaders. It will now be up to the Imperial ground troops to retake these strategic areas, and they must do so quickly while they have complete superiority in air and space.
﻿﻿﻿﻿ 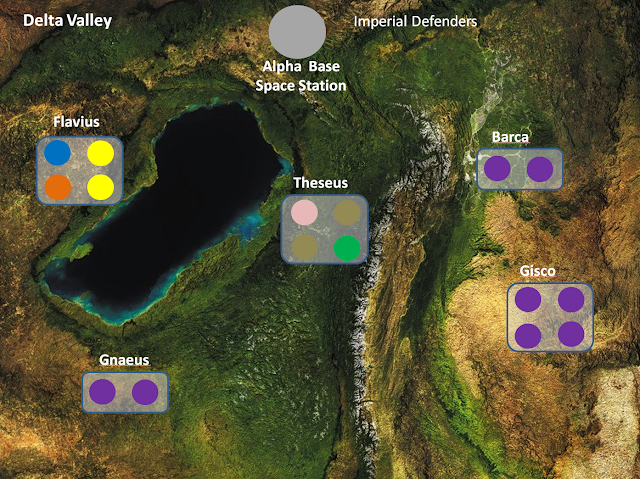 The next chapter in this war is set; the Xenos are busy wrecking terrible damage on the cities they have captured but have lost their fleet in the process, the Imperial troops now race to liberate these cities with the support of their spaceships. The Imperial troops await their reinforcements knowing that there will be an enemy relief force behind the first wave of the attack.......

Posted by JJMicromegas at 09:11 No comments:

The Invasion of Scipio - Prologue

Planet Scipio, while not the richest or biggest planet in the Imperium, had sufficient mineral wealth to fuel its economic and industrial development. It was relatively peaceful before the invasion, tucked away in the corner of the galaxy far from any of the conflict zones. It didn’t have the same depth or breadth in planetary defences as the other worlds that were thought to be primary targets for invaders. This is probably why no one anticipated the alien invasion and how the invaders got so close before they were noticed.

No one knows why the hive fleet decided to launch a surprise invasion at this location. Presumably the hive mind saw a soft target, wanted to exploit the planet’s resources and exterminate its inhabitants. The first wave of the alien attack is focused on the Delta valley on Scipio where there are a high concentration of economically important assets. When the hive fleet Hydra (Imperial codename for the invaders) first arrived within range of the Imperium’s planetary sensors the signal was sent out to the defensive net which detects and responds to threats anywhere in their ring of colonised planets.


Luckily the Imperium’s Rapid Response Force is designed to respond to just such a threat, and while not carrying the full weight of the Imperium’s power, the response force is able to muster the limited forces on Scipio, supplemented by assets from nearby space ports. The plan is to effectively meet and stall the first spearhead of an attack while further reinforcements can be sent. The fate of the planet Scipio and its inhabitants will be determined in space, air and land.

Chapter 1 of  the campaign for the planet Scipio will be played as a series of linked scenarios that will each affect the other to form an overall narrative. This chapter focuses on the first spearhead of the alien invasion into the Delta Valley, an area with many industrial, commercial and military assets. The lore is loosely based on the Warhammer 40K universe with some liberties taken to suite the narrative.


The campaign will be played at three different levels:


I have a long wanted to run something like this, it took a while to organise the miniatures, rules and terrain for two factions in three different game systems. Not to mention the many other gaming diversions that I have gone on. You may ask, why not stick to the 40K universe and play Battle Fleet Gothic (BFG) for the space battles? Well because the BFG ships are expensive, hard to find and I bought into the DFC Kickstarter which was designed by the same author as BFG, Andy Chambers. I’ve roughly shoehorned the DFC factions into the 40K universe: UCM will be used to play the Imperium and the Scourge will be the Tyranids.


I was originally planning on using a campaign structure and victory points system to determine who will win the campaign, however, the results of the first battle made me realise that I could create a better narrative by keeping it free flowing and play the games that I like based on what happens on the tabletop. The goal is to organically form a cohesive story that ties them all together.


If successful, I will keep it going with more chapters that expand the conflict and bring in new belligerents. The first part of the story will deal with the initial space invasion by the xenos, the battle report is coming soon. As a preview, here are some pictures of my two DFC fleets: