The stage has been set and the troops are in their positions, you can read about the scenario and setup here:
http://micromegasatwar.blogspot.ca/2017/08/the-invasion-of-scipio-chapter-3a.html

Today is the day of the liberation or destruction where the fate of the Delta Valley hangs in the balance;
﻿

Image of the Eastern valley showing cities and objectives. 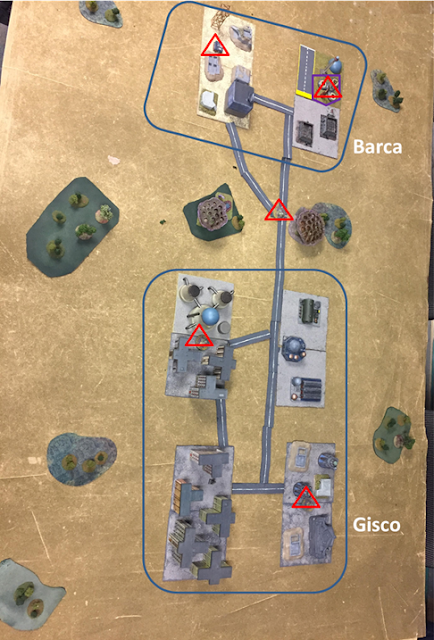 The deployment of troops, the xenos are lying in ambush in the captured cities while the Imperial armour advances on the edge. 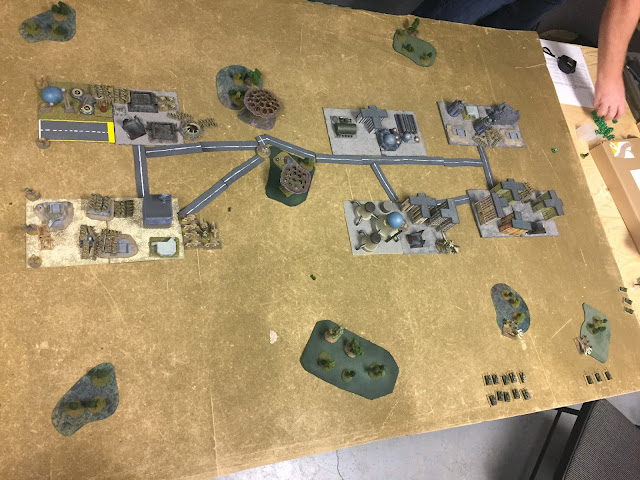 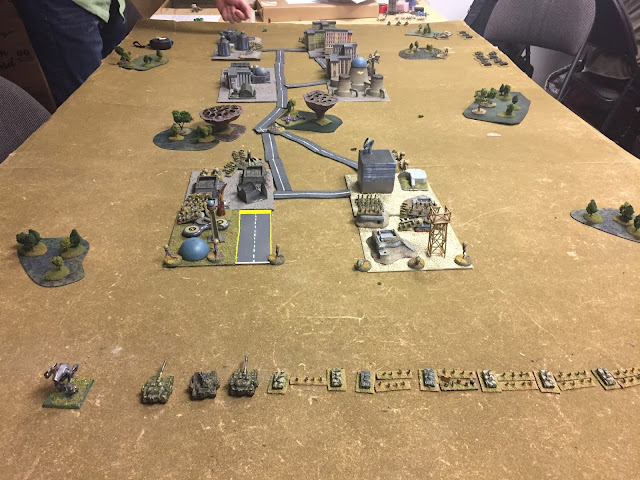 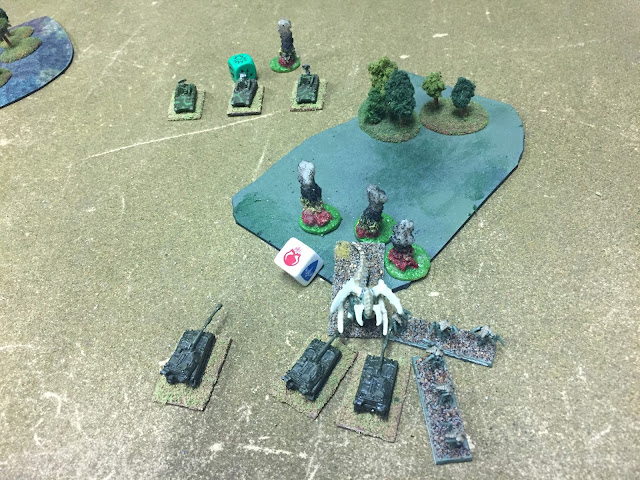 The xenos have hidden amongst the fortifications in the military zone and ruins, their heavy guns hiding out of site of the approaching troops. In the first turn, an Imperial orbital bombardment lands on the airfield at the top of the image scattering and shaking the bugs hiding there. 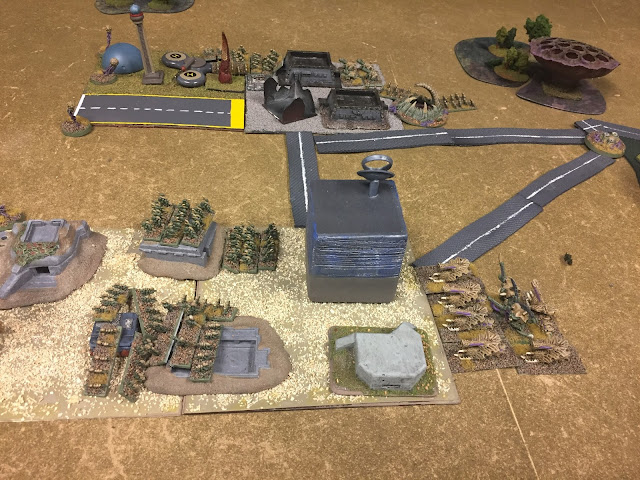 Without warning a formation of genestealers jumps out of the fortifications and assaults Imperial mechanised infantry. 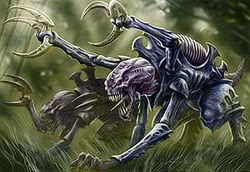 The infantry doesn't have a chance to fire before they are engaged in close range combat with the genestealers, the results are not pretty and the majority of the Imperium troops that faced the assault are wiped out. 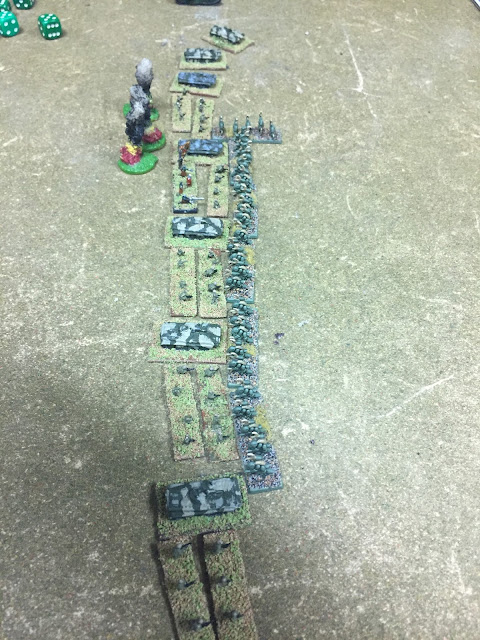 Meanwhile the super heavy tanks take fire from the long range guns of the Xenos and move out of engagement range of those genestealers. The Imperium forces were not expecting such a heavy onslaught this early, the xenos seem to have learned from their mistakes. 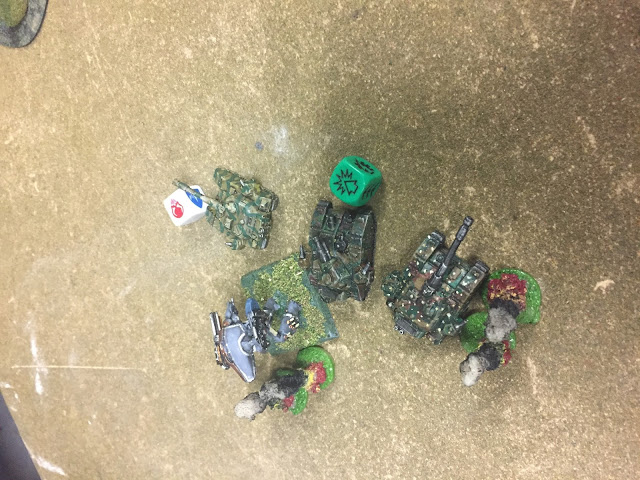 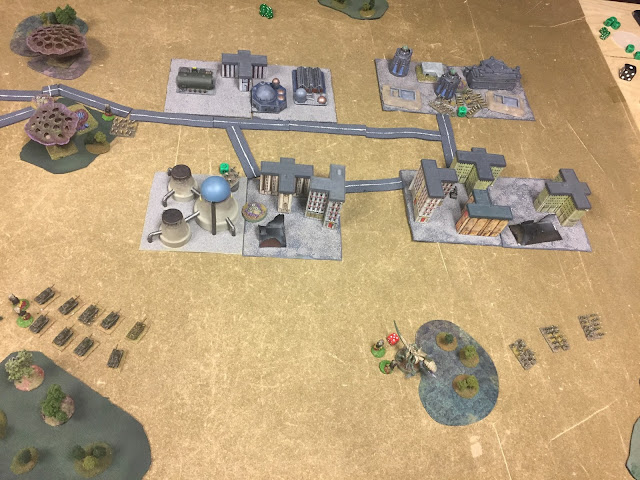 Up North, the War Engine takes more shots and breaks, the Super Heavy Tanks are assaulted by another Trygon swarm that they manage to fend off. The Imperium is looking shaky and needs a morale boost. 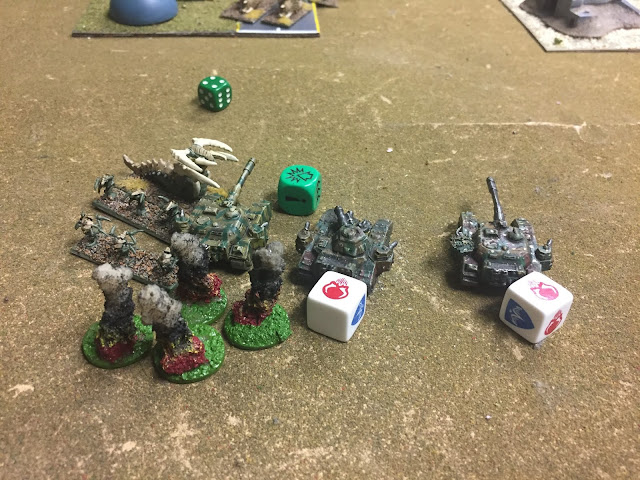 The rumbling of distant helicopters can be heard and gradually build, just in time the Stormtroopers in their Valkyries are being deployed to save the day. 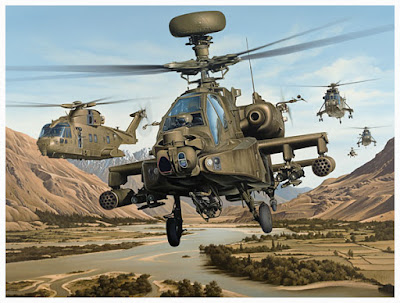 The stormtroopers land in the middle of the table to take an objective and clear out the enemy troops garrisoning it easily. 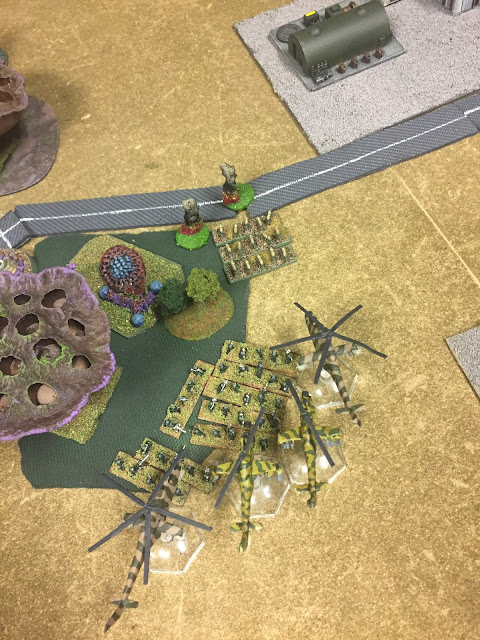 In the South, the tank regiment sees enemy closing on all sides and continues to take fire, they decide to retreat before their formation is broken. 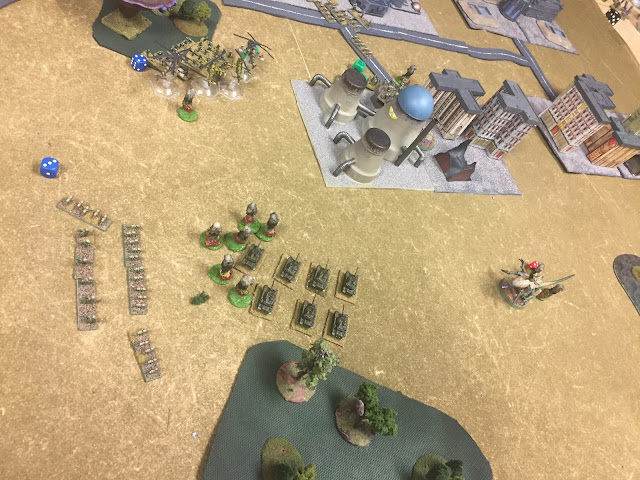 The Valkyries release their rockets and break an enemy formation, the stormtroopers however are surrounded and assaulted by enemy xenos. 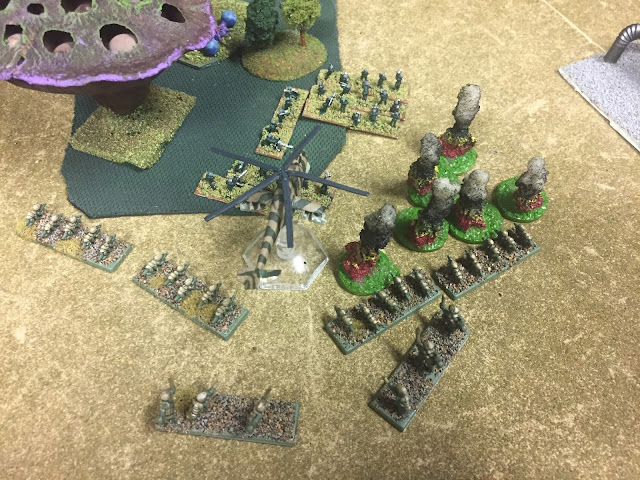 The stormtroopers are in a fight for their life, they manage to hang out and throw back the waves of enemy bugs, just managing to hold onto their position. 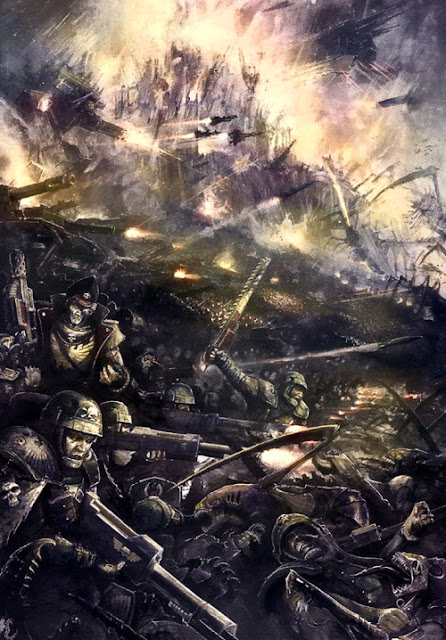 The thunderbolts in the centre right are sent in to provide fire support to the storm troopers, helping to break another enemy formation and provide an avenue for their escape. 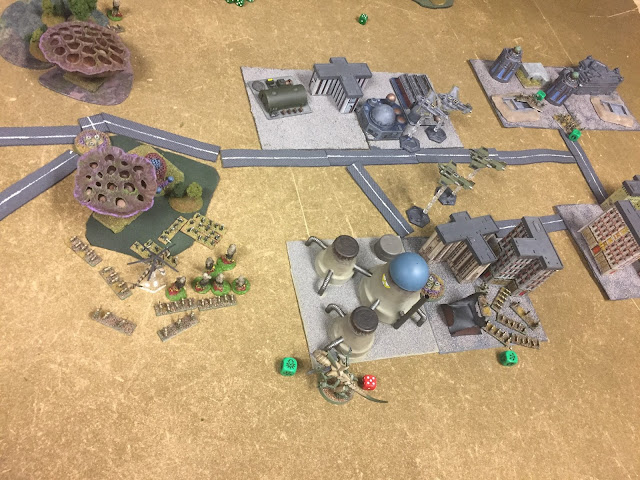 As the game draws to a close, the tank regiment has met up with the war engines in the north as the combined force begins their retreat, the Imperium only contests two objectives while the Xenos still hold the majority of the cities in the Eastern Valley. 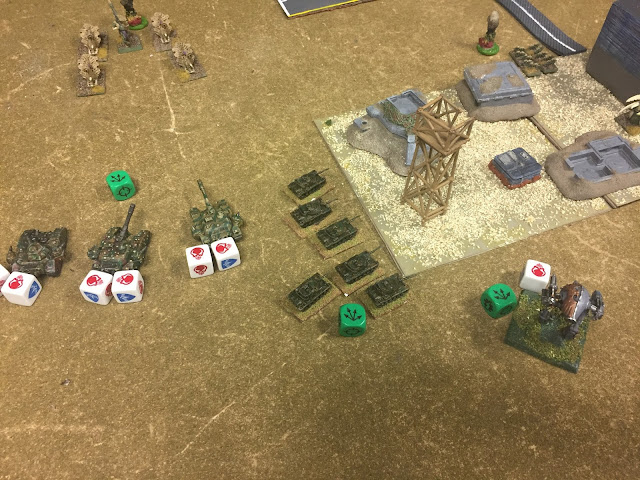 The stormtroopers have a brief respite where they abandoned their hopeless position and managed to capture the power plant. They have no supporting formations so their best hope is to hold on and take cover and wait for an evac. 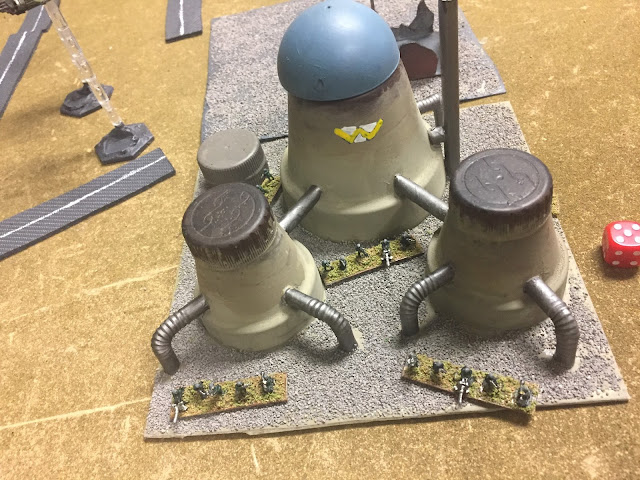 Quiet falls over the Eastern Valley as the Imperial troops withdraw. Their air superiority and bombardment wasn't enough to kick out the dug in defenders who had apparently learned from their last encounter with Imperial troops. The fight for the Scipio valley will continue... 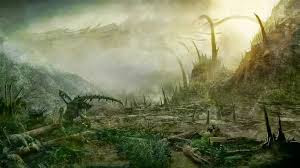 The map of the Delta Valley remains unchanged, the xenos have managed to hold onto the Eastern cities while the rest of the valley is in Imperium hands. Though the Imperial troops have lost this battle this was just the first hastily assembled assault, they are now assembling their reinforcements and orbital support to make another attempt at liberating their cities and relieving whatever citizens may have survived the horror. 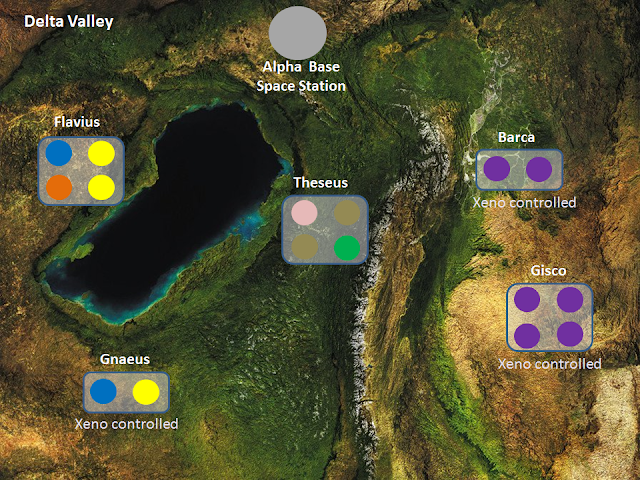 Final thoughts: I played the Imperium this time and there were a few things I did wrong:
- First off my list didn't bring enough durable infantry to be able to survive the continuous assaults from the xenos. My opponent played very deftly and used the terrain to his advantage.
- Secondly, I had some really awful rolls on rallying which meant my thunderbolts, warhounds and super heavy tanks didn't get to really leverage their firepower.
- Lastly, in the previous game with a similar scenario, I gave the Imperium a bigger advantage in points to account for having to assault fortified positions.  I also forgot to give the defenders a +1 to hit for being in cover.