Over the years I’ve put on various scenarios of the Greek-Persian wars, as I've had difficulty translating Thermopylae and Salamis to the tabletop, the battle of Plataea seemed like the next obvious choice:

Over the past couple of months there’s been renewed interest at our club in large ancients battles, mainly kicked off our member Mark’s interest in Hail Caesar. More recently I’ve taken on the mantle with the battle of Asculum (report coming soon) and this battle. My goal is to put on a large battle about once a quarter, our club plays a lot of games at different scales and it's nice to get all the toys out every once in a while. 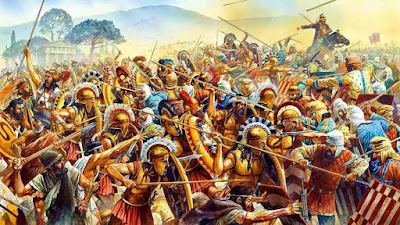 I won't review the history of the battle, I made the following army lists using Lost Battles, by Phil Sabin and the following article:  http://www.academia.edu/18539535/The_Battle_of_Plataea_479_BC_Strategy_tactics_opposing_armies_strategic_and_battlefield_maneuvers_analysis_of_the_conflict

The armies were pretty closely matched in their effective fighting capability (I am ignoring the mass numbers of levy infantry or camp followers that didn't play a part) and I tried to reflect this in the lists, giving the Persians a slight points edge, the Greek notably had no cavalry. 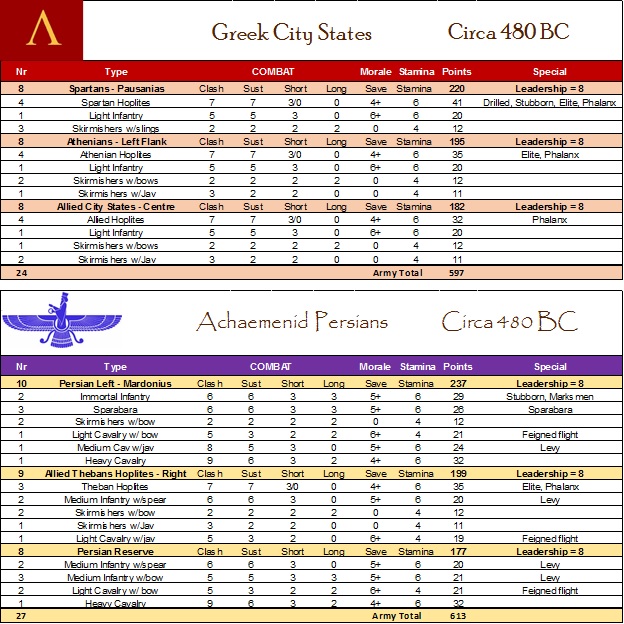 The terrain is a tricky one as there's a lack of clarity of the position of the armies; I generally started the Greeks spread out but on top of hills and the Persians crossing the river in unison. the river was just treated as rough terrain for the purpose of the battle. The trick for the Persians is to use their cavalry and shooting to get in and behind the Greek lines of heavy infantry. The battle was roughly laid out according to the following map: 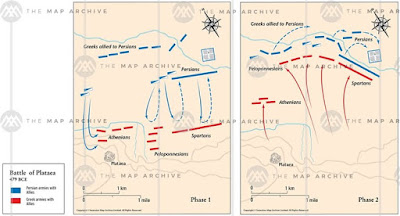 The Spartans are lined up on the Greek right, the Greek allies in the middle and Athenians on the far Left, all spread out with big gaps between the forces. The Persians advance en masse across the river. 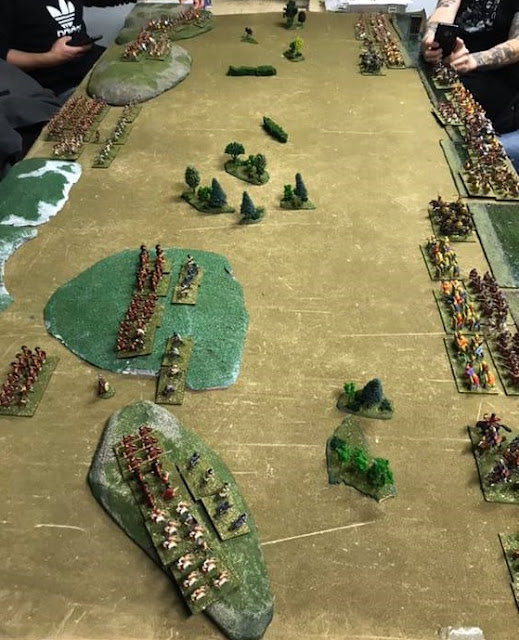 In the middle the Persian reserve make a rapid advance and rain down arrows on the Greek skirmishers. 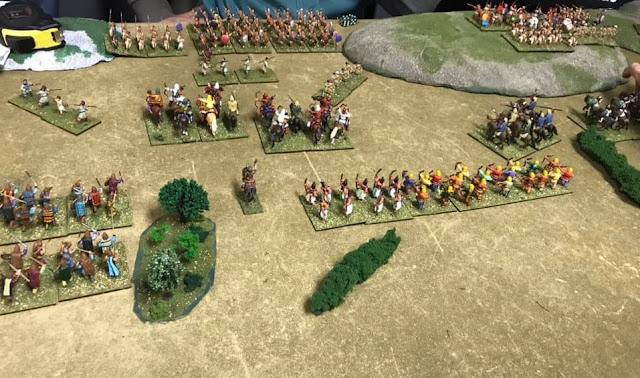 On the Persian far right, the Theban allies advance towards their nemesis Athenians who have parked themselves on top of the hills. 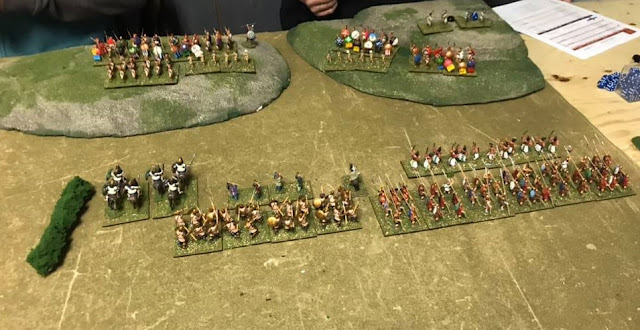 Somewhat ahistorically, the Immortals and heavy cavalry of the Persians hold back on attacking the Spartans, preferring to use their arrows to whittle them down. 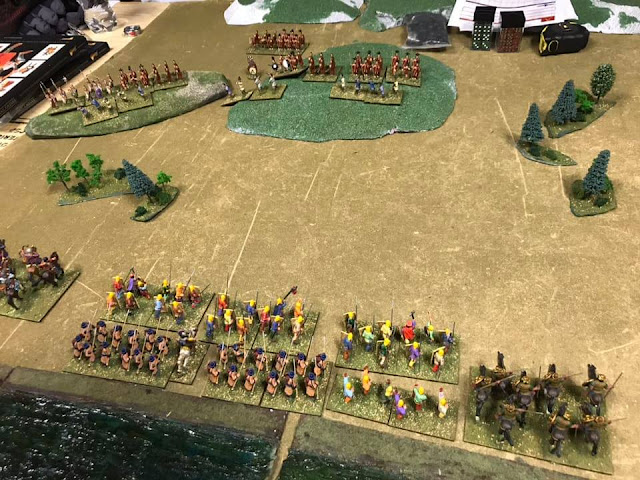 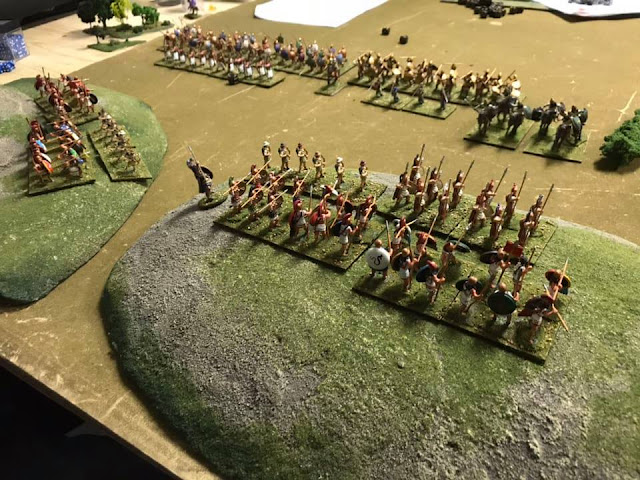 The Allied hoplite division stands their ground and refuses to charge into the Persian infantry for fear of being disordered. Their skirmishers take the brunt of Persian arrows that darken the sky. 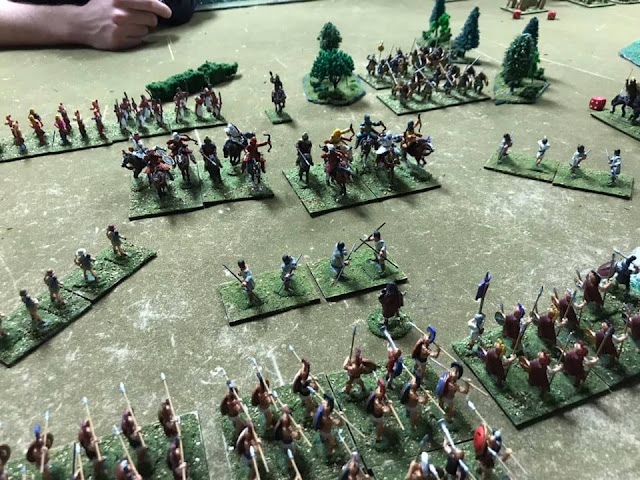 On the right, the Thebans hoplites charge up hill and get stuck in against the Athenians, the Persian medium infantry moves up to support 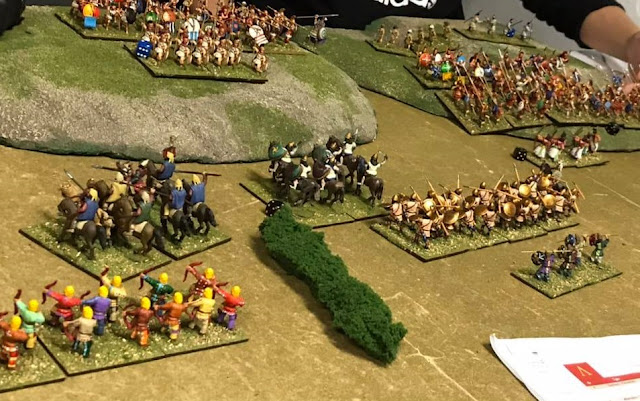 The fighting between the Thebans and the Athenians is intense and swings back and forth. 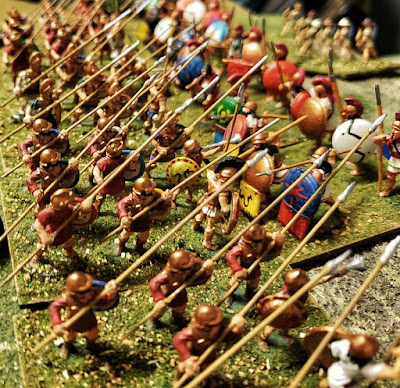 Meanwhile in the middle the Allied hoplites begin their advance only to find the Persian infantry retreating and firing more arrows. 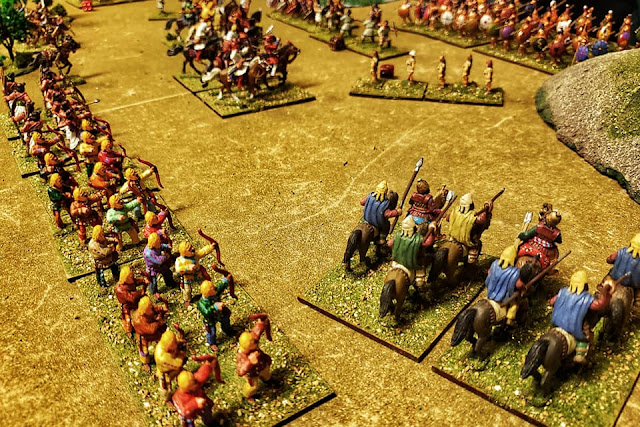 The Immortals are finally ordered to advance and charge the Spartans. 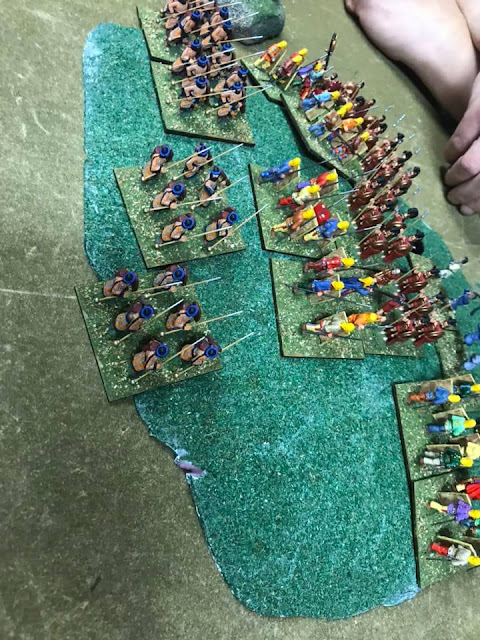 The Spartan line is damaged but stands firm and throws back the Immortals. 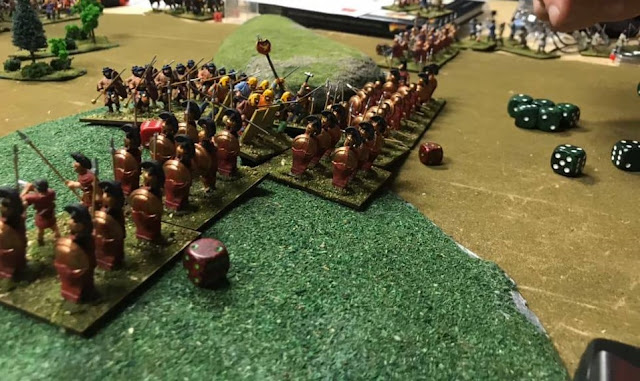 The Thebans and Greek mercenaries are decidedly defeated on flee the field, with the entire division broken, the Spartans standing and the Greek allies making advance in the middle the game was called in favour of the Greeks. 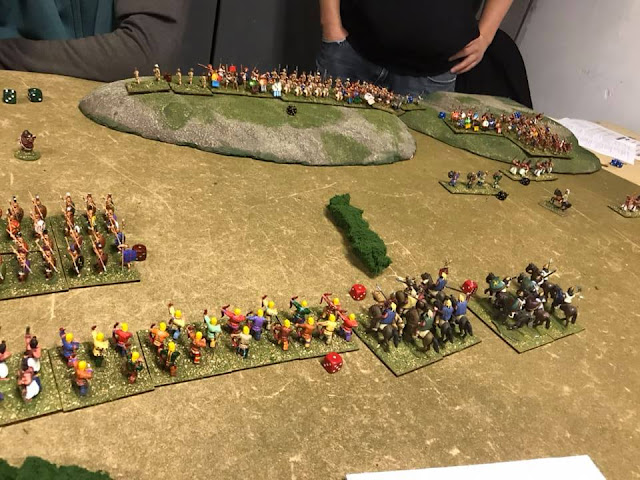 There you have it, the game was quite historical, unfortunate for me as the Persian commander and fun by all standards. We had 8 players total; 3 commanders and a CinC on each side, we started rolling dice at 1:30pm and were done at 4pm, leaving plenty of time for a bit and a pint at the local pub.